From IMDB: “Following a mysterious absence of several years, the Man of Steel comes back to Earth in the epic action-adventure Superman Returns

, a soaring new chapter in the saga of one of the world’s most beloved superheroes. While an old enemy plots to render him powerless once and for all, Superman faces the heartbreaking realization that the woman he loves, Lois Lane, has moved on with her life. Or has she? Superman’s bittersweet return challenges him to bridge the distance between them while finding a place in a society that has learned to survive without him. In an attempt to protect the world he loves from cataclysmic destruction, Superman embarks on an epic journey of redemption that takes him from the depths of the ocean to the far reaches of outer space.”

Click here to see the trailer at “supermanreturns.warnerbros.com” | digg story 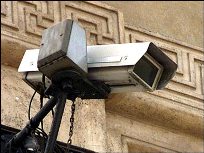 “(AP) The city’s newest breed of surveillance camera will do more than keep an eye on vandals, litterbugs and other miscreants.

“The cameras will also give the crooks a talking-to. Baltimore’s Board of Estimates has approved five talking cameras – armed with motion detectors, a bright flash and a recorded warning, as part of an effort to curb quality-of-life crimes, especially illegal dumping.

“When the solar-powered cameras detect motion, they will issue a scolding: ‘Stop. This is a restricted area. It is illegal to dump trash or spray graffiti here. We have just taken your photograph. We will use this photograph to prosecute you. Leave the area now.’ 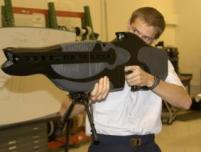 “No this is not a movie prop nor will it be marketed by Mattel for the bigger boys this Christmasâ€“ it is one of two working prototypes of a non-lethal laser gun built by the Air Force Research Laboratory’s Directed Energy Directorate. The non-lethal illumination technology weapon was developed by the laboratory’s ScorpWorks team.

“Dubbed the PhaSR (who needs a Madison Avenue creative team when you can come up with names like this â€“ an acronym for Personnel Halting and Stimulation Response), it is the first man-portable, non-lethal deterrent weapon and is intended for protecting troops and controlling hostile crowds.

“The weapon employs a two-wavelength laser system and is a hand-held, single-operator system for troop and perimeter defense. The weaponâ€™s laser light temporarily blinds its targets.” 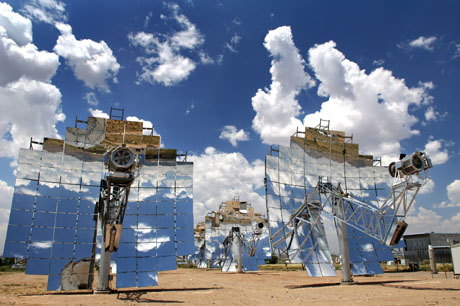 “Two Southern California utility companies are planning to develop a pair of sun-powered power plants that they claim will dwarf existing solar facilities and could rival fossil-fuel-driven power plants.

“Also called an external heat engine, the Stirling engine is a completely sealed system filled with hydrogen. Its design dates to 1816, and it’s named for its inventor, a Scottish minister named Robert Stirling. The focused solar energy, which can reach 1,350 degrees Fahrenheit, heats the hydrogen, making it expand and drive the engine’s four pistons.

“The first phase of the SoCal Edison project will be to build a 1-megawatt test site using 40 dishes, which should be complete by spring 2007. Construction on the full, 500-megawatt facility is expected to begin in mid-2008, and should take three to four years. Each dish can produce up to 25 kilowatts, and the site will eventually have 20,000 dishes stretching across 4,500 acres of desert.” 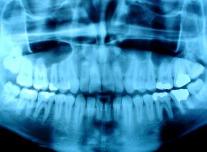 “‘There is still a long road to travel (for a human version). Before that experimental models which are closer to man need to be tested, namely in monkeys, and for that financing is needed,’ she told Lisbon-based TSF radio…

“The three scientists have already patented the vaccine in Portugal and are working on doing so in the United States where they are also seeking funding to further their research, Ferreira said.”

“The Barenaked Ladies are trying out a new method of music delivery: 28 songs, plus video and audio clips and a few live versions, on a 128 mb flash drive. They even say the flash drive is an easy way ‘to share music, videos, pictures and other data’–not the kind of sentiment you’d hear from most bands. The content, including the extras, looks like it will be stuff that’s been at least partlly released before–but it’s still a pretty cool idea, even if the execution could be better.”

“Last month automaker Toyota announced a recall of 160,000 of its Prius hybrid vehicles following reports of vehicle warning lights illuminating for no reason, and cars’ gasoline engines stalling unexpectedly. But unlike the large-scale auto recalls of years past, the root of the Prius issue wasn’t a hardware problem — it was a programming error in the smart car’s embedded code. The Prius had a software bug.

“With that recall, the Prius joined the ranks of the buggy computer — a club that began in 1945 when engineers found a moth in Panel F, Relay #70 of the Harvard Mark II system. The computer was running a test of its multiplier and adder when the engineers noticed something was wrong. The moth was trapped, removed and taped into the computer’s logbook with the words: ‘first actual case of a bug being found.’

“Sixty years later, computer bugs are still with us, and show no sign of going extinct… But which are the worst?… Here, in chronological order, is the Wired News list of the 10 worst software bugs of all time â€¦ so far.” 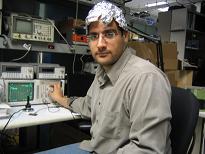 An MIT student study on the protective nature of aluminum foil helmets.

“It has long been suspected that the government has been using satellites to read and control the minds of certain citizens. The use of aluminum helmets has been a common guerrilla tactic against the government’s invasive tactics [1]. Surprisingly, these helmets can in fact help the government spy on citizens by amplifying certain key frequency ranges reserved for government use. In addition, none of the three helmets we analyzed provided significant attenuation to most frequency bands…

“The helmets amplify frequency bands that coincide with those allocated to the US government between 1.2 Ghz and 1.4 Ghz. According to the FCC, These bands are supposedly reserved for ‘radio location’ (ie, GPS), and other communications with satellites. The 2.6 Ghz band coincides with mobile phone technology. Though not affiliated by government, these bands are at the hands of multinational corporations.

“It requires no stretch of the imagination to conclude that the current helmet craze is likely to have been propagated by the Government, possibly with the involvement of the FCC. We hope this report will encourage the paranoid community to develop improved helmet designs to avoid falling prey to these shortcomings.”