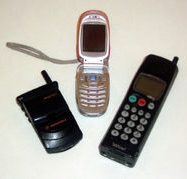 “In that old battle of the wills between young people and their keepers, the young have found a new weapon that could change the balance of power on the cellphone front: a ring tone that many adults cannot hear.

“In settings where cellphone use is forbidden — in class, for example — it is perfect for signaling the arrival of a text message without being detected by an elder of the species.

“‘When I heard about it I didn’t believe it at first,’ said Donna Lewis, a technology teacher at the Trinity School in Manhattan. ‘But one of the kids gave me a copy, and I sent it to a colleague. She played it for her first graders. All of them could hear it, and neither she nor I could.'” 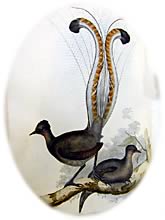 From Wikipedia: “A lyrebird’s call is a rich mixture of its own song and any number of other sounds it has heard. The lyrebird’s syrinx is the most complexly-muscled of the Passerines (songbirds), giving the lyrebird extraordinary ability, unmatched in vocal repertoire and mimicry. Lyrebirds render with great fidelity the individual songs of other birds and the chatter of flocks of birds, and also mimic other animals, human noises, machinery of all kinds, explosions and musical instruments. The lyrebird is capable of imitating almost any sound — from a mill whistle to a cross-cut saw, and, not uncommonly, sounds as diverse as chainsaws, car engines, rifle-shots, camera shutters, dogs barking and crying babies…”

In this video, the lyrebird imitates car alarms, chainsaws, cameras, and all kinds of birds!