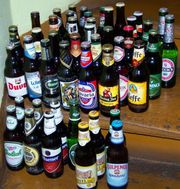 “Moderate drinking reduces the risk of heart disease but the beneficial effects of alcohol seem to work differently in men and women, Danish researchers said on Friday… They found that for men drinking daily seems to have the biggest positive effect on health while in women the amount of alcohol consumed may have more of an impact.

“‘The risk of heart disease was lowest among men who drank every day,’ said Janne Tolstrup of the National Institute for Public Health in Copenhagen… But a daily tipple did not cut the odds of heart disease in women, according to the findings reported in the British Medical Journal.

“The researchers studied the effects of alcohol on more than 50,000 men and women over more than five years. Men in the study who drank one day a week had a 7 percent reduced risk of heart disease compared to non-drinkers, but daily moderate drinkers were 41 percent less likely to suffer from heart disease.”