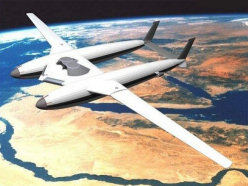 “The idea sprung from the brain of Robert D. Hunt, a theoretical physicist and inventor who founded Hunt Aviation to develop his patented “gravity powered hybrid aircraft” concept which operates on the principles of buoyancy, aerodynamic lift, and gravity. It uses a cycle of climbing and descending to maintain its lift and forward speed, mimicking the behavior of the bodies of warm and cold air which make up the weather.

“In order for the GravityPlane to become airborne, gas bags inside a pair of rigid, zeppelin-like structures are filled with helium from storage tanks inside the vehicle. This causes the aircraft to become lighter-than-air, and it rises from the ground. Compressed-air jets on the sides of the craft add further propulsion, pushing the vehicle skyward and decreasing the craft’s overall weight by releasing the stored air which acts as ballast. Once the craft reaches the altitude where the helium is no longer lighter than the surrounding air– theoretically as high as ten miles up– it is unable to climb any further. Some of the stored compressed air is then expanded into the dirigible areas, decreasing the buoyancy effect of the helium and starting the aircraft’s descent phase.”