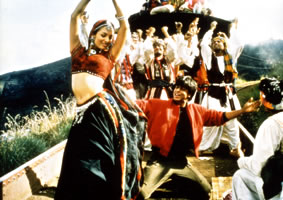 When we went to see Inside Man the other night, the opening music got my attention. It is very catchy and unique, which lead me to look for it later online. I came to find out that the music was from of a 1998 Bollywood film, Dil Se.

The song is called “Chaiyya Chaiyya”; here’s the low-down courtesy of the Wikipedia.

“Chaiyya Chaiyya is the first song in the famous Hindi film Dil Se directed by Mani Ratnam… It became popular quickly upon release and its music video gained the same status partly because it was filmed on a moving train… Chaiyya Chaiyya not only reached the charts in India. The song was also popular in England… A remix of the song was used in the 2006 film, Inside Man.”

I found a version online, which is apparently free for the downloading. I can only assume it’s in the public domain. This remote site is hosting the file. http://scoopsthepodcast.com/2006/03/sukhwinder-singh-and-sapna-awasthi.html. There is a video clip from the movie available on YouTube.