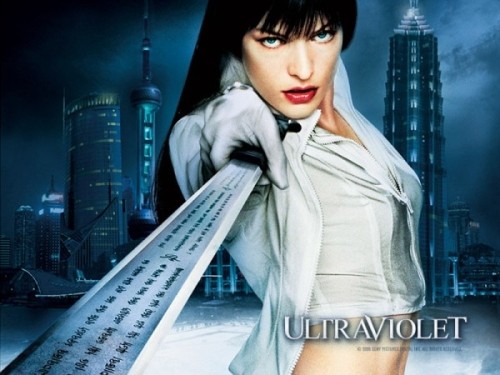 From IMDB – “Set in the late 21st century, a subculture of humans have emerged who have been modified genetically by a vampire-like disease (Hemophagia), giving them enhanced speed, incredible stamina and acute intelligence, and as they are set apart from “normal” and “healthy” humans, the world is pushed to the brink of worldwide civil war (a war between humans and hemophages) aimed at the destruction of the “diseased” population. In the middle of this crossed-fire is – an infected woman – Ultraviolet (played by Milla Jovovich), who finds herself protecting a nine-year-old boy who has been marked for death by the human government as he is believed to be a threat to humans.”

The official movie homepage can be found at http://www.sonypictures.com/movies/ultraviolet/site/.

UPDATE: Oh no, heard terrible things… waiting to rent it. Rotton Tomatoes rates it a 5/100. 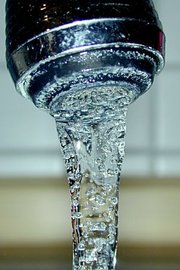 “Dean Kamen, the engineer who invented the Segway, is puzzling over a new equation these days. An estimated 1.1 billion people in the world don’t have access to clean drinking water, and an estimated 1.6 billion don’t have electricity. Those figures add up to a big problem for the world—and an equally big opportunity for entrepreneurs… To solve the problem, he’s invented two devices, each about the size of a washing machine that can provide much-needed power and clean water in rural villages.

“‘Eighty percent of all the diseases you could name would be wiped out if you just gave people clean water,’ says Kamen. ‘The water purifier makes 1,000 liters of clean water a day, and we don’t care what goes into it. And the power generator makes a kilowatt off of anything that burns.’…

“The electric generator is powered by an easily-obtained local fuel: cow dung. Each machine continuously outputs a kilowatt of electricity. That may not sound like much, but it is enough to light 70 energy-efficient bulbs. As Kamen puts it, “If you judiciously use a kilowatt, each villager can have a nighttime.”

“Asterisk is free software that lets you create a fully functional, easily customizable, private branch exchange (PBX). Businesses like Asterisk because they can save money by using it, and because it is open source, they can add functionality to it easily and inexpensively. Asterisk is also becoming popular with home office users — so much so that it spawned a new project called Asterisk@Home, which released its 1.0 version last year. Now there’s even a version of Asterisk that runs on OpenWrt, a Linux distribution designed to run on your wireless router (see “OpenWrt nears prime time”). I found it to be worthwhile, but I wouldn’t depend on it for my home office.

“I installed Asterisk on OpenWrt White Russian RC4 on a Linksys WRT54GS wireless router. It’s my first Asterisk installation. I admit that I scraped the knuckles on both hands getting Asterisk correctly configured, but now that I’ve done it, I would say it was worth all the frustrations it caused me. Not only do I now have a functional personal PBX, I’ve also learned a little about the black art of telephony along the way.”