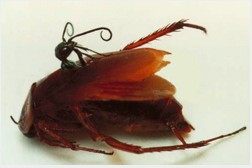 This is a wacky but irresistible story, stranger than fiction.

“Ampulex compressa is a wasp that has evolved to tackle roaches, insert a stinger into their brains and disable their escape reflexes. This lets the wasp use the roach’s antennae to steer the roach to its lair, where it can lay its egg in it. Parasite Rex author Carl Zimmer tells the story in gooey, graphic detail:

“The wasp slips her stinger through the roach’s exoskeleton and directly into its brain. She apparently use sensors along the sides of the stinger to guide it through the brain, a bit like a surgeon snaking his way to an appendix with a laparoscope. She continues to probe the roach’s brain until she reaches one particular spot that appears to control the escape reflex. She injects a second venom that influences these neurons in such a way that the escape reflex disappears.

“From the outside, the effect is surreal. The wasp does not paralyze the cockroach. In fact, the roach is able to lift up its front legs again and walk. But now it cannot move of its own accord. The wasp takes hold of one of the roach’s antennae and leads it–in the words of Israeli scientists who study Ampulex–like a dog on a leash.”