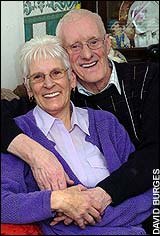 “A woman who had been blind for 25 years awoke in hospital after suffering a heart attack and found that she could see again… Since 1979, Joyce Urch had lived in a world of shadows and near-darkness, but was astonished to find her sight restored when she came round after being resuscitated…

“Doctors have been unable to explain what happened, but Mrs Urch, 74, was happy yesterday to put it down to a ‘miracle’…

“She and Mr Urch celebrated their golden wedding anniversary last weekend in a way of which she had never dreamed. She said: ‘I love going out now. I can look around and see the trees and squirrels and pigeons.'”

“That’s not the only problem with the city’s police computer system, says Sergeant Eliezer Rivera. Rivera says the network is spotty and only as fast as a dial-up connection.

“Keene’s City Council is looking into getting the police a faster, more extensive wireless network to make things better. Other departments and Keene’s school system might also be able to use it.”