Video: Flickr CC-licensed pics set to hilarious music and lyrics – Cory Doctorow:
Jonathan Coulton made this amazing video in tribute the Flickr: it’s a stream of funny, oddly mismatched Creative Commons-licensed photos with soulful lyrics that describe them in earnest, deadpan irony. For anyone whose ever browser the Flickr Interesting Photos stream, this is weirdly familiar: the hilarious juxtaposition of all these disparate images from all over the world. Setting them to music makes them all make sense, somehow:

10. Numa Numa Dance – “What do you get when you combine a Romanian chart-topper, an American teenager, and a webcam? The Numa Numa Dance. New Jersey 19-year-old Gary Brolsma found Internet fame when he not only lip-synched, but did a slick choreographed routineâ€”albeit without leaving his chairâ€”to “Dragostea Din Tei,” a dance track by Romanian pop trio O-Zone… Though Brolsma ultimately shunned his fame, his performance is among the most-linked, forwarded, and immitated videos of the the year, even earning him a profile in the New York Times.” 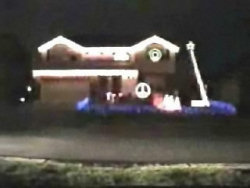 8. “Wizards in Winter” synchronized Christmas lights – When Mason, Ohio’s Carson Williams set up a video camera to record his music-synchronized Christmas light display, I’m sure he knew it was cool… The video, which shows Williams’ 25,000-light display dancing in perfect sync with the Trans-Siberian Orchestra’s bombastic ‘Wizards in Winter,’ seems so perfect that some people believed it was a series of stop-motion capture rather than real-time. In fact, the setup took the electrical engineer nearly two months and $10,000 to accomplish…. Miller Brewing filmed his spectacle for a Miller Lite commercial (‘Enjoy the Lites’), and the police eventually asked him to shut it down,,.

Click here to see the “Wizards in Winter” display.