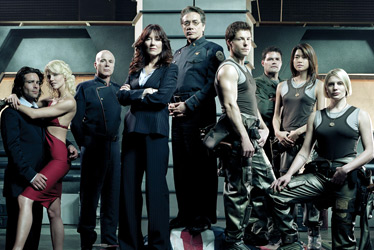 “Most of you probably think this entry has got to be a joke. The rest of you have actually watched the show. Adapted from a cheesy ’70s Star Wars clone of the same name, Galactica (returning in January) is a ripping sci-fi allegory of the war on terror, complete with religious fundamentalists (here, genocidal robots called Cylons), sleeper cells, civil-liberties crackdowns and even a prisoner-torture scandal. The basic-cable budget sometimes shows in the production, but the writing and performances are first-class, especially Edward James Olmos as the noble but authoritarian commander in charge of saving the last remnants of humanity. Laugh if you want, but this story of enemies within is dead serious, and seriously good.”