“As a software engineer, you might want any number of things out of your job – a steady paycheck, the opportunity to work on interesting projects, a springboard to the next better job, or maybe you just like hanging out with other programmers. But by ‘effective’, I mean the ability to complete projects in a timely manner with the expected quality. After working on dozens of software releases, I believe the following practices will bring you there, and while they may involve sticking your neck out, I’d like to think they will also advance your professional reputation, career longevity, and personal satisfaction.” 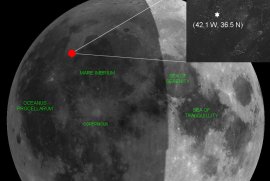 “NASA scientists have observed an explosion on the moon. The blast, equal in energy to about 70 kg of TNT, occurred near the edge of Mare Imbrium (the Sea of Rains) on Nov. 7, 2005, when a 12-centimeter-wide meteoroid slammed into the ground traveling 27 km/s.

“‘What a surprise,’ says Marshall Space Flight Center (MSFC) researcher Rob Suggs, who recorded the impact’s flash. He and colleague Wes Swift were testing a new telescope and video camera they assembled to monitor the moon for meteor strikes. On their first night out, ‘we caught one,’ says Suggs.

“The object that hit the moon was ‘probably a Taurid’,. says MSFC meteor expert Bill Cooke. In other words, it was part of the same meteor shower that peppered Earth with fireballs in late October and early November 2005… The moon was peppered, too, but unlike Earth, the moon has no atmosphere to intercept meteoroids and turn them into harmless streaks of light. On the moon, meteoroids hit the ground–and explode.”