“Tsar Bomba (literally “Tsar of the bombs”), developed by the Soviet Union, is the largest nuclear explosive ever detonated, and the most powerful of such ever employed by humans. It was tested on October 30, 1961 over the island of Novaya Zemlya in the Arctic Sea. There is no clear evidence that any examples other than the one tested were ever made. 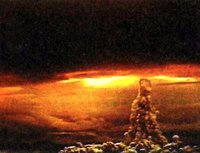 “The original USA estimate of the yield was 57 Mt, but since 1991 all Russian sources have stated its yield as ‘only’ 50 Mt… The fireball touched the ground, reached nearly as high as the altitude of the release plane, and was seen 1,000 km away. The heat could have caused third degree burns at a distance of 100 km. The subsequent mushroom cloud was about 60 km high and 30-40 km wide. The explosion could be seen and felt in Finland, even breaking windows there. Atmospheric focusing caused blast damage up to 1,000 km away. The seismic shock of the test went around the Earth three times.

“The Tsar Bomba is the most powerful device ever constructed by humans, and its test is the largest detonation ever. Since 50 Mt is 2.1Ã—1017 joules, the average power produced during the entire fission-fusion process, lasting around 3.9Ã—10-8 seconds or 39 nanoseconds, was about 5.3Ã—1024 watts or 5.3 yottawatts. This constitutes over 1% of the power output of the Sun (383 yottawatts)… By contrast, the largest weapon ever produced by the United States, the now-decommissioned B41, had a predicted maximum yield of 25 Mt, and the largest nuclear device ever tested by the USA (Castle Bravo) yielded 15 Mt.”

click here to see the video at “www.spikedhumor.com” | digg story

“With NASA’s beleaguered shuttle still grounded over safety concernsâ€”and given the unanswered questions about its replacement, the Crew Exploration Vehicle, which won’t be ready to fly until 2012â€”the European Space Agency is mulling an option to buy its own ride to space. This month ESA plans to request $60 million from its member states to help Russia prepare its new, reusable spaceship, the Clipper, for a crewless test flight by 2011 and a manned flight by 2012. 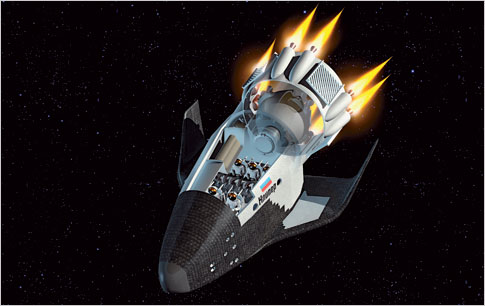 “The six-person Clipper is designed to replace Russia’s three-person Soyuz capsule, which has been in operation since the 1960s and is currently the only reliable transport to the International Space Station. Lighter than NASA’s shuttle and more powerful than the Soyuz, the Clipper will be more than just a taxi to the ISS. Notes ESA official Manuel Valls, ‘It could go to the moon.’

“The Russian Federal Space Agency showed off a full-scale mock-up of the craft at the Moscow International Air Show in August. If all goes wellâ€”that is, if ESA ponies up fundingâ€”design studies of the Clipper could begin in early 2006.”