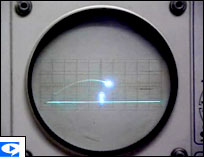 “Higinbotham designed the game as entertainment for visitors’ days at BNL (Brookhaven National Laboratory). In the 1950s, most of the exhibits were static displays. Higinbotham, who was then head of the Instrumentation Division, said it occurred to him that ‘it might liven up the place to have a game that people could play, and which would convey the message that our scientific endeavors have relevance for society.’

“The division had a small analogue computer that contained ten direct-connected operational amplifiers. The computer’s instruction book described how to generate various curves on the cathode-ray tube of an oscilloscope, using resistors, capacitors and relays. Among the examples were the trajectory of a bullet subject to gravity and wind resistance, missile trajectories and a bouncing ball. The bouncing ball inspired Higinbotham to design a tennis game. Four of the operational amplifiers were used to generate the ball motions and the others to sense when the ball hit the ground or the net, and to switch the controls to the person in whose court the ball was located.

click here to read more and see a video at “bnl.gov” | digg story