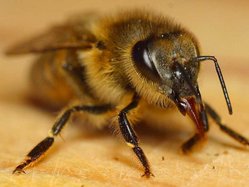 A woman in Johannesburg, South Africa smashed her car into an electricity substation that was home to a massive bee hive. She was killed. Her husband was injured.

From Reuters:
(The hive) was 10 years old and had in excess of a million bees and they just went wild,” said Paul Nel, spokesman for Netcare 911, a private paramedic and ambulance service…

“The people managed to stumble out of the car but they were just overcome by bees,” he said.

About ten days ago, a mysterious radio signal around Ottawa, Canada began blocking the operation of hundreds of garage door openers. (Background here.) On Thursday, the garage doors began working again. From CBC News:
The powerful radio signal causing the problem stopped transmitting on Thursday afternoon, around the time CBC News contacted the U.S. Embassy to ask if it knew anything about it.

The embassy categorically denies that it had anything to do with it.

The signal was being transmitted at 390 megahertz, a U.S. military frequency used by the Pentagon’s new Land Mobile Radio System. The same frequency is used by garage doors openers, which started to malfunction around the city about almost two weeks ago. A similar problem has popped up around military bases in the States.