“New Brunswick and Nova Scotia have opted into a new study on tidal power that could see underwater turbines installed in the Bay of Fundy and in waters off five U.S. states. Tidal power has long been talked about in the Fundy region, which boasts of having the highest tides in the world, but new technology means it’s getting a fresh look… 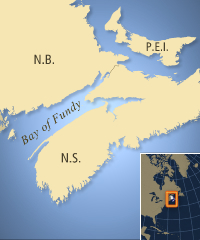 “Oceanographer George Hagerman has scouted potential locations, including the Bay of Fundy. ‘In order for the capital project to pay for itself, it has to survive 20 or 30 years. And it has to produce well, and produce high reliability,’ Hagerman said in a corporate video touting the study.

“Hagerman said the researchers are talking to eight companies about ‘in-stream’generators that will come on the market over the next couple of years. The Nova Scotia government says they would be similar to wind turbines in structure, but would be located underwater and wouldn’t be visible from shore.

“It could be five years before a turbine is actually in the water, generating electricity from the two sets of tidal flows each day.”