Watch out for Wilma – the Atlantic’s most powerful recorded hurricane ever. Here is a high-resolution satellite image of Hurricane Wilma over the Caribbean Sea. The image was taken from Satellite Terra on October 19, 2005.

From ABCNews.com:
“Gathering strength at a fierce pace, Hurricane Wilma swirled into the most intense Atlantic storm ever recorded Wednesday, a Category 5 monster packing 175 mph wind that forecasts warned was ‘extremely dangerous.’

“Wilma was dumping rain on Central America and Mexico, and forecasters warned of a ‘significant threat’ to Florida by the weekend. ‘All interests in the Florida Keys and the Florida peninsula should closely monitor the progress of extremely dangerous Hurricane Wilma,’ the National Hurricane Center in Miami said.

“Wilma’s confirmed pressure readings Wednesday morning dropped to 882 millibars the lowest minimum pressure ever measured in a hurricane in the Atlantic basin, according to the hurricane center. Lower pressure translates into higher wind speed.” 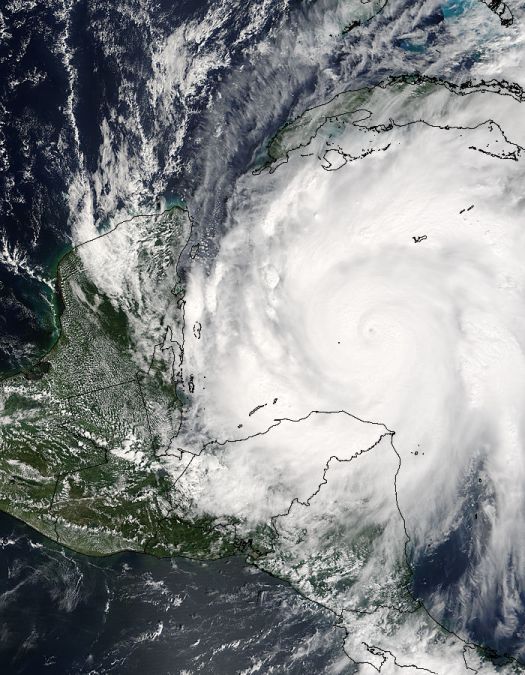 “The DUI case is real, and will come before panel of Florida judges this Friday. But surely the state of Florida has certified these Intoxilyzer 5000 machines? “Yes, back in 1993 they have. The manufacturer, CMI (with the great URL: Alcoholtest.com) has since made changes to both the hardware and the software…

“Theoretically a judge could force CMI to open the application’s source code, but this is highly unlikely. The company, which refused to discuss the case, instead claims that the software code for the 25-year-old device is a trade secret. Never mind that the actually application is less than 24 kilobytes in size (yes, kB) and still runs on z80 processors that were introduced in 1976.”